Let’s say you’re spending a morning or afternoon in downtown Dallas. You’ve already mapped out the perfect spot to eat — and if you haven’t, check out this list of 20 great restaurants in and around downtown Dallas. Now, you’re ready to take a walk and take in the sights. 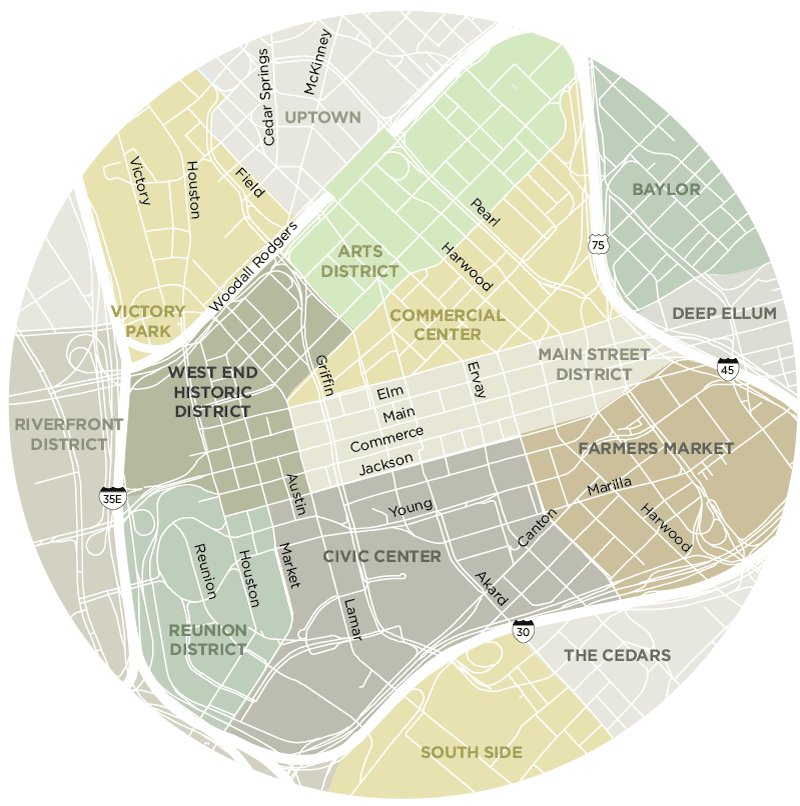 1. AMERICAN AIRLINES CENTER The arena is home to the Dallas Mavericks, the Dallas Stars and plenty of big concerts. AT&T Plaza on the south side of the venue features big screens. 2500 Victory Ave. americanairlinescenter.com.

2. PEROT MUSEUM OF NATURE AND SCIENCE The $185 million museum boasts a high level of interactivity: On every floor, in every hall — even in the lobby — visitors get the chance to make their museum experience unique, whether it’s through designing their own birds, creating colors, building robotic vehicles or trying experiments in the Bio Lab. 2201 N. Field St. perotmuseum.org

3. DALLAS MUSEUM OF ART General admission is free at this museum, which features a global collection made up of more than 22,000 works. If you have a little one in tow, be sure to visit the Center for Creative Connections, which includes kid-friendly attractions and chances to create your own masterpieces. 1717 N. Harwood St. dma.org.

4. NASHER SCULPTURE CENTER The museum is home to the sculpture collection of the late Patsy and Raymond Nasher, who also financed the more than $70 million needed to build it. At the center, which was designed by Renzo Piano, don’t miss spending time in the lovely garden. 2001 Flora St. nashersculpturecenter.org.

5. KLYDE WARREN PARK This charming 5.2-acre park is within easy walking distance of the Dallas Arts District and tends to be bustling with activity. Attractions include a dog park, a play area for kids, food trucks, fitness programs and more. 2012 Woodall Rodgers Freeway. Go to klydewarrenpark.org for a calendar of events.

9. WYLY THEATRE The building, designed by architects Rem Koolhaas and Joshua Prince-Ramus, is notable for the look of its outer aluminum tubes and the infinite configurations that are possible for performances inside. 2400 Flora St. attpac.org.

10. CROW COLLECTION OF ASIAN ART The permanent set of galleries focuses on the arts and cultures of Japan, China, India and Southeast Asia. 2010 Flora St. crowcollection.org.

12. MAIN STREET GARDEN Often the site of fun events like a taco fest and a local-music showcase, the park is otherwise a comfortable spot for a rest. Main Street Garden has a fountain, a mini playground, a lawn and a dog run. 1902 Main St. downtowndallas.com.

13. NEIMAN MARCUS The upscale retailer, founded in 1907, has had its flagship store at the corner of Main and Ervay in downtown Dallas since 1914. Many designer labels roost here, so make sure you have the time (and the moolah) to shop. 1618 Main St. neimanmarcus.com.

14. DALLAS CITY HALL The I.M. Pei-designed municipal building is worth walking by — even if you aren’t going inside to sit in on a City Council meeting. The site has famously served as a futuristic backdrop for movies, most notably 1987’s RoboCop. 1500 Marilla St. dallascityhall.com.

17. REUNION TOWER The observation deck at 470 feet, dubbed the GeO-Deck, features 360-degree views of Dallas. You can have lunch or a snack at Cloud Nine, which offers seasonal dishes with a Texas twist, or try Five Sixty by Wolfgang Puck, featuring Asian fusion cuisine. 300 Reunion Blvd. E. reuniontower.com.

18. DEALEY PLAZA and THE SIXTH FLOOR MUSEUM Dallas’ past is forever tied to the Kennedy assassination. Learn more about what occurred that day as well as the life and legacy of JFK by exploring Dealey Plaza and the Sixth Floor Museum’s exhibits featuring artifacts, photographs, documentary films and more. 411 Elm St. jfk.org.

19. OLD RED MUSEUM OF DALLAS COUNTY HISTORY & CULTURE Housed in a former courthouse built in the late 1800s, this ode to Dallas heritage chronicles the cultural, political, economic and social history of the Dallas County area. The courthouse is also home to the Dallas Tourist Information Center with brochures and other info. 100 S. Houston St. oldred.org.

20. JOHN F. KENNEDY MEMORIAL PLAZA New York architect Philip Johnson designed the John F. Kennedy Memorial, a 50-foot-square, concrete, open-roofed cenotaph. (That’s a memorial for someone whose remains are elsewhere.) Inside the stark monument, the president’s name is inscribed on a granite slab. One block east of Dealey Plaza at 646 Main St.

21. DALLAS HOLOCAUST MUSEUM/CENTER FOR EDUCATION AND TOLERANCE The museum includes artifacts such as prisoners’ personal items, prison uniforms, photos, documents and a boxcar that was used to transport prisoners. 211 N. Record St. dallasholocaustmuseum.org.

22. DALLAS WORLD AQUARIUM This attraction includes a rain-forest exhibit and a tunnel with a transparent acrylic top that allows visitors to view sharks from below, as well as a variety of marine species. 1801 N. Griffin St. dwazoo.com.

Public transportation: How to get around downtown Dallas?

The Dallas Area Rapid Transit, or DART, features a light rail line and buses, with many stops in downtown Dallas, go to dart.org.

If you want a free ride from downtown Dallas to North Oak Cliff, a fun neighborhood with shops, restaurants and bars, hop on the Dallas Streetcar, which runs every 20 minutes and picks up at Union Station. It’s a short walk from Reunion Tower or the Sixth Floor Museum.

CityPass sends you to some of the best attractions in D-FW, then saves you 41 percent on admission prices. The pass costs $48 for ages 13 and up, $32 for kids 3-12, and you can buy it at citypass.com/dallas. Note that it’s only valid for nine consecutive days.

How it works: The first two attractions are set — the Perot Museum of Nature and Science and the Reunion Tower GeO-Deck. Then, you pick two more: Dallas Zoo or the Sixth Floor Museum; the George W. Bush Presidential Library and Museum or the Dallas Arboretum.